Greetings once again fellow Valorian Knights! Welcome back to our third and final developer blog before the Exalted Update goes live April 7th on Xbox One, Xbox Series S|X, Playstation 4, Playstation 5, Steam, and the Epic Games Store! To recap the information found in our first and second blogs, one of the major features for this update includes the long awaited Valorplate revamp, a system called Valorplate Shards. With the goal of diversifying your armory, each of the twelve Valorplates now has four unlockable Shards that highlight the different power fantasies each Valorplate embodies. As players unlock and upgrade their Shards, the Valorplates will also reach Ascendant and Exalted status, gaining new proficiencies through additional passive abilities.

Of course, the big question has been: “How do I obtain these wonderful Shards you speak of?”

Before we talk about unlocking Shards, let’s go over how to unlock Shard Slots. Players will be able to unlock up to two Shard slots during their journey, but these powers must first be earned in combat. The first Valorplate Shard slot can be unlocked by defeating Zamora the Far-seeing, and those who can best Macros will unlock a second slot for all Valorplates. Players who have already beaten these bosses in the past or players who opt to skip the story progression through the Challenger boost will automatically start with both Shard slots unlocked!

Each Valorplate Shard will have its own unlock criteria, rewarding you for spending time with the Valorplate and becoming intimate with its style and functions. Shards can have multiple unlock criteria, with the more difficult ones having up to three objectives to complete. 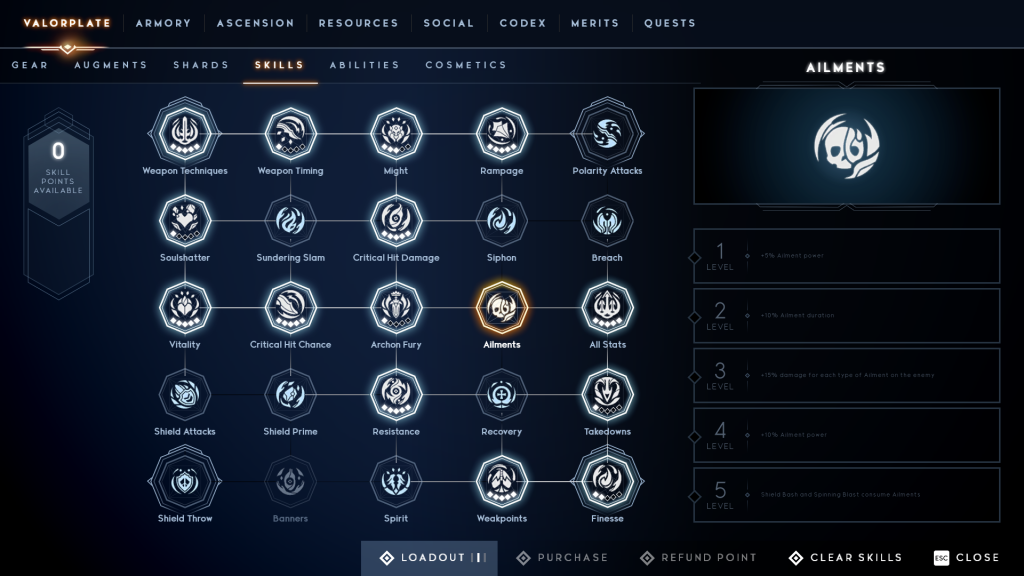 We also wanted to encourage players to explore and care about their entire Valorplate catalog. At the Forge, you will be able to upgrade each of your Shards up to five times based on your total collection of Shards. The more total Shards you collect, the higher you can increase their power!

While these new additions to our Valorplate experience are exciting, we also know that players have been eagerly awaiting other inventory updates. We’ve listened to feedback that organizing and maintaining builds were often tedious due to our current loadout system. So let’s go over some of the new features going into your personal menus.

The “Equipment” Tab has been renamed and repurposed as the “Valorplate” tab. This rework will now consolidate and hold various sub-tabs for critical items such as Gear and Augments and also house other important attributes such as Skills, Shards, Abilities and Cosmetics.

Under this new Valorplate tab, Skills can now be tied to individual Valorplates instead of having a global application. The Abilities sub-menu will display all the passive abilities and your Archon Fury ability. Any items applied in the Cosmetics tab will now also reflect in the Valorplate pedestal in the Sanctum. Players can interact with the pedestals to easily copy their gear, augments and skill configurations across Valorplates and loadouts.

Did we just mention loadouts? In addition to these changes, each Valorplate will feature 3 loadout slots, containing the full set of Gear, Augments, Shards, your Skill Grid and Cosmetics choices. With three slots per Valorplate you can now quickly toggle between each and swap your entire build in seconds!

Now let’s go over the last batch of Valorplate Shards! As a reminder, please note the information (the numbers, visuals, or descriptions) are not final and subject to change before the update goes live.

Way of the Wolf

Way of the Hawk

Way of the Endless

Power of the Void

Way of the Kraken

We’d like to once again thank all our fans for staying with us, both during the development of Godfall and beyond its launch. It is a pleasure collaborating with content creators and players alike to bring out the full potential of our game. We are now just days away from the full release of the Exalted Update – please stay tuned for our patch notes covering other details such as the enhanced story campaign, overhauled combat mechanics, new game modes and more!