FRISCO, Texas (February 2, 2021) – The Gearbox Entertainment Company will join Embracer Group as a wholly-owned subsidiary of the Sweden-based company, it was announced today. The transaction, which is worth up to $1.3B, also provides Gearbox with access to capital, adding rocket fuel to Gearbox’s powerful creative engine, and positions Gearbox’s robust IP catalogue, AAA development studios, and North American publishing capabilities to become a significant part of the Embracer Group’s diverse and robust family of member companies. Gearbox is a founder and employee-owned creator and publisher of award-winning and commercially successful properties with a mission to entertain the world.

Embracer Group, headquartered in Karlstad, Sweden, maintains a global presence through its now seven operative groups and ownership of an extensive catalogue of more than 200 franchises with more than 5,500 employees around the world. With its 550 team members in Frisco, Texas and Quebec City, Gearbox Entertainment—best known for the creation of the groundbreaking, record-setting Borderlands and Brothers in Arms franchises and the development of award-winning, best-selling games in the Half-Life, Counter-Strike, Tony Hawk’s Pro Skater, 007 James Bond, and Halo franchises—will join Embracer Group to accelerate the next step of Gearbox Entertainment’s creative journey. Gearbox will become Embracer Group’s seventh operating group.

“Lars’s vision of Embracer as an allied partner group committed to fueling and accelerating the ambitions of a series of decentralized, successful entrepreneurial companies while magnifying the collective value and advantages of diversification across the entire group is the most brilliant strategy and design for short, medium, and long-term success in this industry that I have ever encountered in my 30 years in this industry,” said Randy Pitchford, founder of The Gearbox Entertainment Company. “The feeling at Gearbox is that we are just getting started and this transaction is not merely a stimulant for the talent of our employee-owned company, but a propellent for the exciting future we have planned.”

The Gearbox team has developed and engaged a plan for immediate and long-term growth that includes the expansion of talent at both studios, the creation of new Gearbox studios, and expanded partnerships. This merger enables Gearbox to do more with its existing brands, create new brands, and, potentially, undertake the merger and acquisition of other successful industry and industry-adjacent entities and properties.

“Gearbox is arguably one of the most creative and valuable independent developers in the world,” commented Lars Wingefors, founder and CEO of Embracer Group. “We believe that the resources offered by Embracer will position Gearbox for significant growth in the years to come.”

Gearbox confirmed that Randy Pitchford will continue in his current role as head of Gearbox Entertainment. Pitchford accented the prioritization of Gearbox’s talent and its partners in the course of this transaction and expressed his eagerness and excitement to maintain and increase the value of its relationships with the Gearbox team, Gearbox customers, and Gearbox allies.

Juno Capital Partners and Union Square Advisors LLC acted as M&A and financial advisors to Gearbox on this transaction and Fenwick & West acted as legal counsel.

ABOUT THE GEARBOX ENTERTAINMENT COMPANY

The Gearbox Entertainment Company, LLC is an award-winning, independent creator and distributor of transmedia entertainment for people around the world. Gearbox Entertainment develops and publishes products through its subsidiaries, Gearbox Software and Gearbox Publishing. Gearbox Entertainment has become widely known for successful game franchises including Brothers in Arms and Borderlands, as well as acquired properties Duke Nukem and Homeworld, which it distributes across the world. Gearbox Software is an award-winning, independent developer of interactive entertainment based in Frisco, Texas. It was founded in 1999 by game industry veterans, and its first release was Half-Life: Opposing Force. Gearbox Publishing was established in 2016 with the goal of helping developers around the world bring their products to market while retaining their unique creative visions. More information can be found at www.GearboxSoftware.com.

Embracer Group is the parent company of businesses developing and publishing PC, console and mobile games for the global games market. Embracer Group has an extensive catalogue of over 200 owned franchises, such as Saints Row, Goat Simulator, Dead Island, Darksiders, Metro, MX vs ATV, Kingdoms of Amalur, TimeSplitters, Satisfactory, Wreckfest, Insurgency and World War Z, amongst many others.

Ascend to Glory in Godfall on PC and PlayStation 5 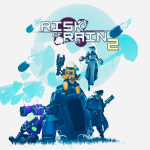 Make Out Like a Bandit in Risk of Rain 2 – New Survivor, Boss and More Now Available on PC