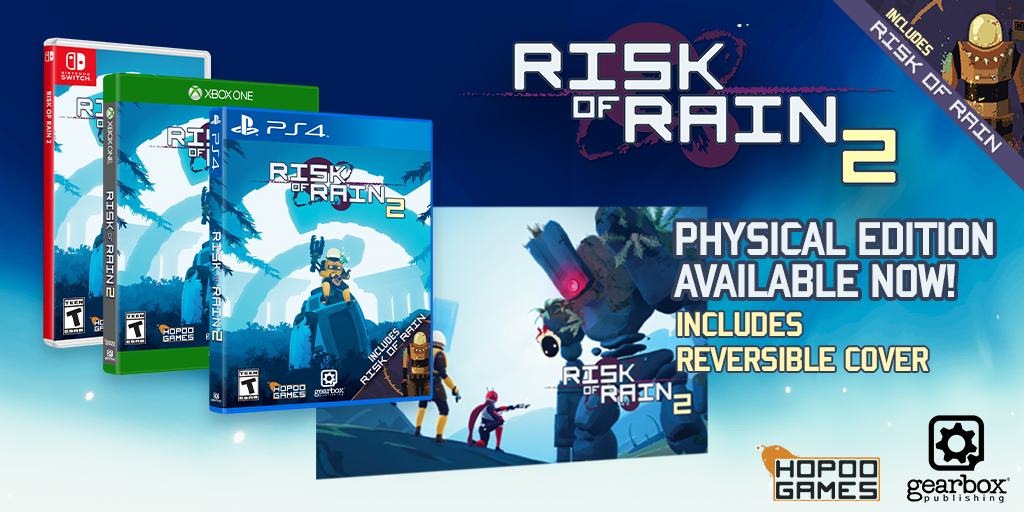 FRISCO, Texas – Nov. 15, 2019 – Hopoo Games and Gearbox Publishing today announced that Risk of Rain 2 physical edition for Nintendo Switch, PlayStation®4 and Xbox One is now available in select retailers across North America and Europe. The physical edition includes the original 2D roguelike hit Risk of Rain on the same cartridge and a reversible cover with original artwork.

On top of this bundle, Risk of Rain 2 will receive continued developer support with new stages, playable Survivors, challenging adversaries and other content added through next year. The next update for all console platforms drops this winter, with more in store for spring and summer of 2020. Pick up a copy at Walmart, GameStop, Target and other retailers in-store or online just in time for the Holiday season.

The sequel to the beloved indie hit, Risk of Rain 2 brings 3D graphics and third-person shooter mechanics to the franchise while holding true to its roguelike roots. Survivors can play solo or team up with up to three other friends to fight through hordes of monsters, unlock new loot, and find a way to escape the planet.

Press and media can find assets for Risk of Rain 2 here. For more information about Risk of Rain 2, check out Twitter, Facebook and the Hopoo Games DevBlog.

Save & Accept
We All Fall Down Brings a Fiery Conclusion to We Happy Few on November 19th
First PlayStation 5 Title Announced at The Game Awards, Looter-Slasher Godfall