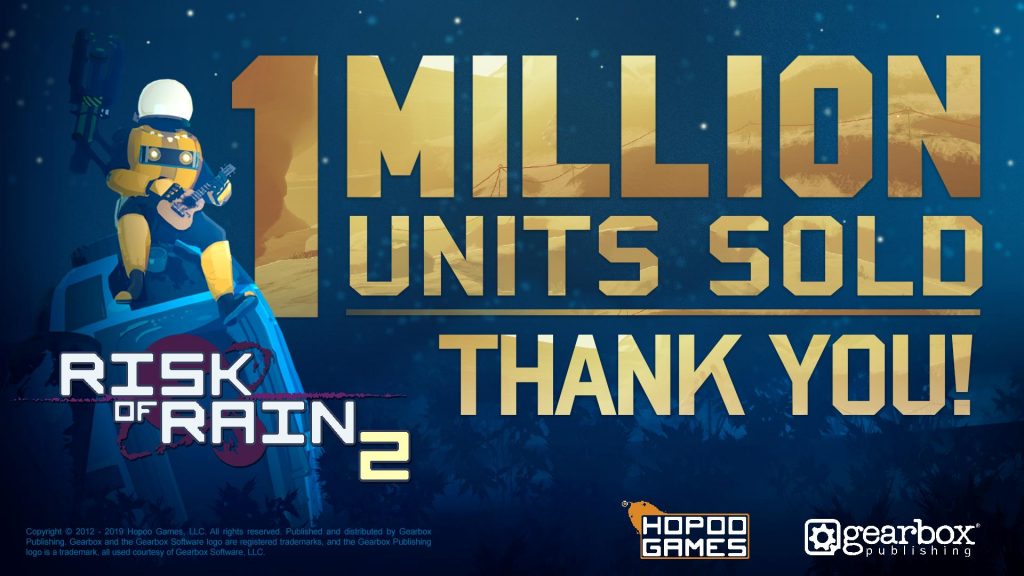 A Deluge of Players Flood the Co-Op Roguelike Shooter

FRISCO, Texas – May 3, 2019 – Hopoo Games and Gearbox Publishing today announced that Risk of Rain 2, its new third-person roguelike shooter, has sold over one million units in the month following its launch into Steam Early Access on March 28, 2019. This significant milestone comes hot on the heels of the Risk of Rain 2 early access forecast reveal, which detailed content players can expect leading up to launch next Spring.

“First off, we are beyond excited to announce that Risk of Rain 2 has surpassed one million sales on Steam alone in the month following our Early Access launch!” said Paul Morse and Duncan Drummond of Hopoo Games. “To give you guys a little bit of context, it took us almost five years to hit that same number on Steam for Risk of Rain 1. We are so excited to see how many of you are jumping into RoR 2 and bringing your friends with you, thank you all so much.”

The sequel to the beloved indie hit, Risk of Rain 2 brings 3D graphics and third-person shooter mechanics to the franchise while holding true to its roguelike roots. Risk of Rain 2 is available on Steam in early access for $19.99 and slated to launch in Spring 2020. Download it today here: https://store.steampowered.com/app/632360/Risk_of_Rain_2/

© 2020 Gearbox Publishing, LLC. All rights reserved.
Our websites use cookies to distinguish you from other users of our Sites. This helps us to provide you with a good experience when you browse our Sites and to improve our Sites. This Cookie Policy provides you with information about the types of cookies we use and the purposes for using those cookies, and applies to our Sites that link to or display this Cookie Policy.