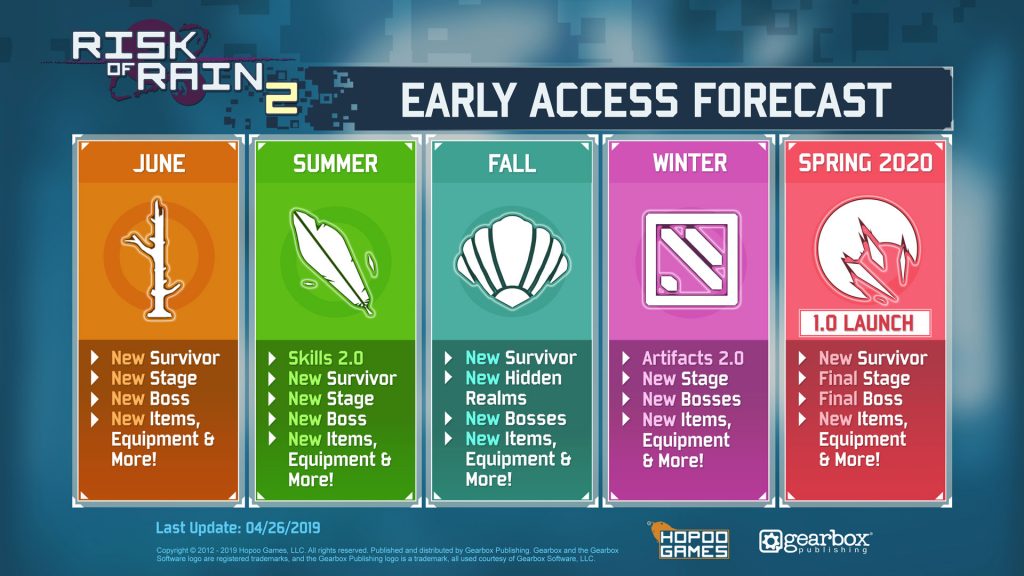 A downpour of new content will flood the game from June through December 2019, with launch slated for Spring 2020

FRISCO, Texas – Apr. 26, 2019 – Hopoo Games and Gearbox Publishing today unveiled the early access roadmap for Risk of Rain 2, their popular third-person roguelike shooter. The roadmap details a deluge of content that will roll out during Risk of Rain 2’s early access period in the form of five updates, starting in June leading up to the game’s full launch in Spring 2020. An infographic detailing early access roadmap can be found here: https://gearboxsoftware.box.com/s/hemyidty9j1anfrlhk8sfansoaxvc6el

“It is really important for us to have transparency with our amazing early access community,” said Paul Morse, co-founder of Hopoo Games. “We are sharing this forecast so players know what to look forward to and what the team is working towards in making Risk of Rain 2 the best game of its kind. That’s only possible with the input and feedback we get from our players.”

In the coming months, players can look forward to new formidable bosses, unexplored levels, localization, and powerful items while playing as Survivors both new and returning. The Summer and Winter updates mark the debut of “Skills 2.0” and “Artifacts 2.0”, with the final boss and level saved for the full launch in Spring 2020.

“Thank you all so much for the amazing support over the first month! We hope that the Roadmap meets our community’s expectations. It’s intended to be an active part of development and we’ll continue to keep our ears open to community feedback across Discord, Twitter and everywhere else.” Says Duncan Drummond, co-founder of Hopoo Games . “We are also really excited to support our international fans, and we hope that the localization efforts are a good start.”

Risk of Rain 2, the sequel to the beloved indie hit that sold more than 3 million copies, brings 3D graphics and third-person shooter mechanics to the franchise while maintaining that classic co-op roguelike gameplay fans love from the original. Hopoo Games is working fellow co-op shooter nerds, Gearbox Publishing, to make Risk of Rain 2 the best of its kind. Risk of Rain 2 is now available on Steam in early access for $19.99. Download it today here: https://store.steampowered.com/app/632360/Risk_of_Rain_2/