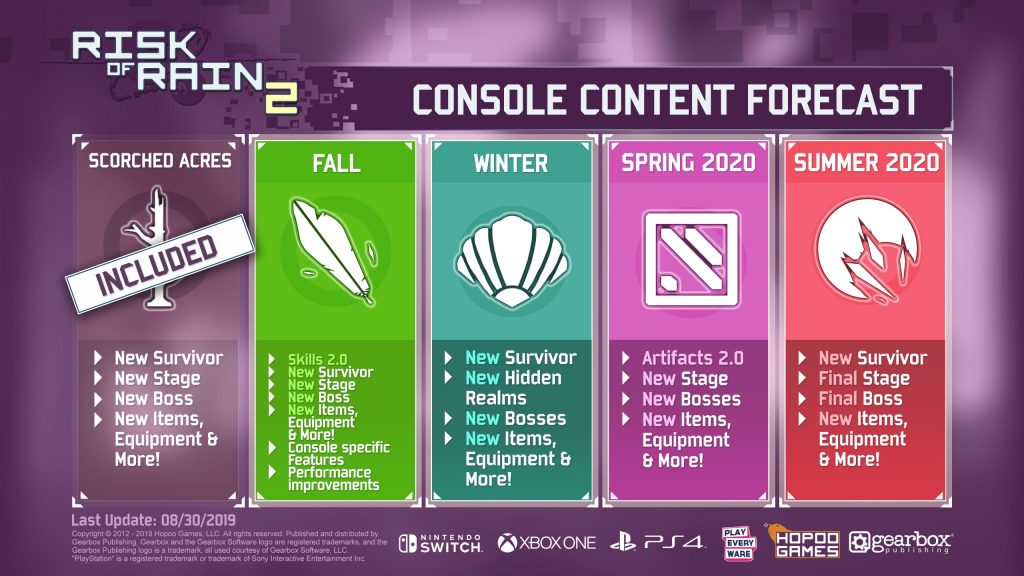 FRISCO, Texas – Aug 30, 2019 – During Gearbox’s Main Theater Show at PAX West today, Hopoo Games and Gearbox Publishing made the surprise announcement that Risk of Rain 2 is now available on Nintendo Switch™, PlayStation®4 and Xbox One for $29.99. Starting today, console players can download Risk of Rain 2 and join the growing community of over one million PC players in the game’s signature co-op chaos from the comfort of their couches.

The classic multiplayer roguelike, Risk of Rain, also returns with a release on Xbox One. With Risk of Rain and Risk of Rain 2, you can play solo, or team up with up to three friends to fight your way through hordes of monsters, unlock new loot, and find a way to escape the planet. Risk of Rain 2 is also currently available on Steam in early access and is slated for a full PC launch in Spring 2020 with a suggested retail price of $29.99 USD.

Gearbox Publishing and Hopoo Games worked with PlayEveryWare to port Risk of Rain 2 to the multiple consoles and will continue their partnership for each of the upcoming content updates. Currently, Risk of Rain 2 on consoles includes the Scorched Acres update which offers the Scorched Acres stage, Survivor REX and The Grovetender boss along with more items and equipment. Players can also look forward to a new content update rolling out on consoles every season up through Summer 2020. These updates will include a mix of new Survivors, bosses, stages, items, and many more surprises.

Risk of Rain 2 is available now for Steam Early Access, Xbox One, PlayStation®4, and Nintendo Switch™.